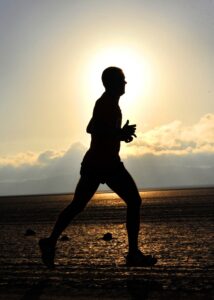 “[looking away from all that will distract us and] focusing our eyes on Jesus, who is the Author and Perfecter of faith [the first incentive for our belief and the One who brings our faith to maturity],” Hebrews 2:2 AMP

We’ve been looking at the topic of letting God be God in our lives. It’s something I think is truly important at this time. You might well ask me why I believe that, as I hope you will. If you don’t ask me, then please, at the very least ask yourself the question. Having asked the question then sit quietly, and let God speak to your heart through his word.

I have been an observer of the news throughout my life, since childhood. I get absolutely no joy in reading and hearing about the tragedy besetting the lives of other human beings in this world. I applaud the more recent Apostles like Smith Wigglesworth and others who would not let a newspaper cross the threshold of their home. But as a watchman, I have a need to be aware of what is going on in this world, particularly as it shrinks in dimensions daily.

I take no pleasure in finding out about the corruption of those people elected to public office. Particularly as there doesn’t appear to be any form of character test applied to candidates, other than toeing the party line.

I do get distressed and yes angry when I hear the repetition of tales of those in public power feathering their own nest at the expense of good, hard-working people. People who have strived to do the best they can for their families, performing their work to the very best of their abilities, diligently and faithfully; only to find that. Government officials have withdrawn support for a whole industry because one of their mates wants to have sole access to that sector, from outside of the country.

Some will say: “Well that’s what a free market is all about!” Such remarks usually come from someone whose source of employment hasn’t been affected, to date. But they are the first to cry poor when the same thing happens to them.

You might well ask where am I going with this? Especially as I’ve said that some of these things get me angry. Isn’t that a negative emotion? Well, “No!” Even Paul, in his epistle to the Ephesians, stated “Be Angry, and sin not…don’t let the Sun go down upon your wrath.” I’ve said it before, and I’ll say it again, there’s no such thing as a bad emotion. Our full gambit of emotions is given by God. But it is the development of the Fruit of the spirit (Galatians 5:22-23) that assists us in the appropriate use of them.

What grieves me the most is the many voices who say they speak for God. I have to ask myself when I hear some things, “what god are they speaking for?” The most prominent are those in political leadership whose sickening rhetoric is so vastly different from the God I have grown up knowing and loving, and being loved by.

Now, before anyone gets the idea that I am talking about a denominational image of God, I’d just like to set the story straight. I’m talking about the God Jesus came to reveal. I say it often; that so many people like to quote and remember John 3:16:

“For God so greatly loved and dearly prized the world that He [even] gave up His only begotten (unique) Son, so that whoever believes in (trusts in, clings to, relies on) Him shall not perish (come to destruction, be lost) but have eternal (everlasting) life.” John 3:16 AMPC

It’s powerful, it is a true encouragement for those who don’t know the Living God. However:

“For God did not send the Son into the world in order to judge (to reject, to condemn, to pass sentence on) the world, but that the world might find salvation and be made safe and sound through Him.”  John 3:17 AMPC

It would appear that this second part of the statement that Jesus is disclosing to Nicodemus about his mission and purpose has been lost in the minds of so many of those voices I spoke of before.

The concept of God had become so screwed up by religious zealots and religiosity, through fancy clothes and traditions of men more intent on maintaining the perks of their position within the constructs of the religion they had made to replace the relationship with God; that he sent Jesus Christ, the anointing and the anointed, to reset that image.

This is further backed up in statements he made to his disciples when they asked him to reveal the Father to them: “If you have seen me, you have seen the Father!” (John 14:9) and “The Father and I are One!” (John 10:30)

I don’t know about you, but those statements are pretty clear to me. But, the common thread I get from so many of those voices out there “speaking” for god is that they’ve gone back to the twisted image that Jesus came to reset.

As we enter this time of preparation and remembrance of the Christmastide can I ask you to return to the Synoptic Gospels of Matthew, Mark, Luke and John and allow Jesus to reveal the true nature of God to you. By doing so we can get that much closer to the goal to: